A strong commitment to creating a ‘Safety Always’ culture at Kings Transport involves a regular regime of alcohol and drug testing.

The benefits gained have demonstrated how necessary the testing is, ensuring the regular program will continue to be carried out across their operations.

Kings is an Australian owned company that was established in Melbourne in 1991 and now offers integrated supply chain solutions across Australia and New Zealand.

The transport company engages more than 1800 drivers with a contractor fleet varying in size from bike couriers and vans to semi-trailers and a company fleet comprised of client dedicated and custom-designed equipment including 100 percent electrical trucks.

“We have a zero-tolerance drug-free workplace policy and perform both drug and alcohol tests at the same time, taking less than 10 minutes per person,” said Borthwick.

“Our testing regime covers a range of situations including pre-employment checks, random tests and challenges. The testing is usually random and without notice, not just because it helps to ensure drivers are compliant – not knowing when they will be tested, but because drivers are not always in the depot in the morning to clock on.” 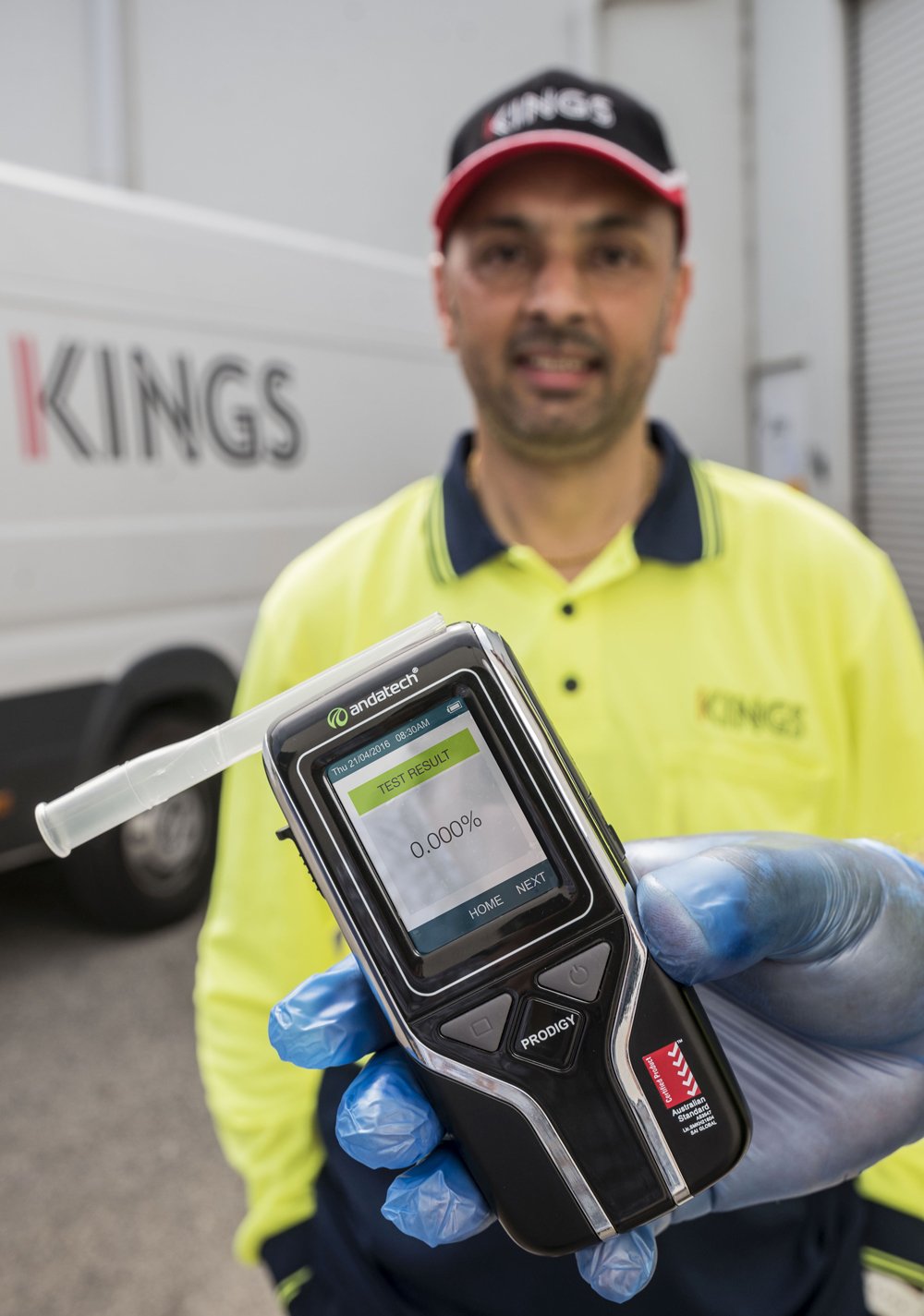 Random drug and alcohol testing is a vital part of a drug-free workplace policy as it helps ensure drivers comply with the drug-free standard of Kings work environment during their employment.

Even with this regime of testing, Kings does have drivers who have displayed non-negative results to either alcohol or drugs.

“We have processes and procedures in place to support and handle employees when their tests are non-negative.

“In addition to random testing, we occasionally receive ‘at cause’ reports where a driver or office worker is suspected of substance abuse and we will conduct tests to check the veracity of the claim.

“Individuals who abuse our policy pose an increased safety and business risk, such as causing an accident, which could result in harm to individuals and/or property, litigation and damage to our reputation,” he said.

The drug testing kit used by Kings is Andatech’s compact DrugSense DSO 7 and allows drivers to collect their own saliva sample. Clear, easy-to-read results are ready within five minutes of sample collection.

Kings use Andatech’s Prodigy S breathalyser, which has a fuel cell sensor that is designed for exceptional accuracy, offers unlimited tests between calibrations, and has a long lifespan for high volume testing environments.

The Prodigy S has a warm up time within two seconds, a response time within three seconds and a recycle time of five seconds. It uses four AA batteries and has an accuracy of ± 0.005%BAC. It also comes with a Bluetooth printer and a data input and memory function that can store up to 10,000 entries in the unit itself or exported to a PC.

The breathalyser has three decimal place readings from 0.000 to 0.400% BAC and the drug kit shows a positive or negative result. Both units are certified to Australian Standards AS4760 (saliva drug testing) and AS3547 (alcohol).

“Both testing units are very easy to operate whether I’m out in the field at our depots or when I do the weekly training of new drivers to reinforce the importance of being free of alcohol and drugs,” Borthwick said.

“Our Safety Always culture is in place to ensure the safety of all stakeholders and is the utmost priority of our daily operations.

“The drug and alcohol testing regime plays a vital role in this and we’ve found the equipment and supplies from Andatech are easy to use, accurate and cost effective.

“Part of the testing process is to ensure the units are re-calibrated every six months to ensure the accuracy of the readouts. This is done locally so we aren’t without the units for more than a few days.

“In the 18 months that we’ve used Andatech equipment, we’ve only had one issue with the drug testing kit and that was when people who have a very dry mouth weren’t getting enough saliva on the swab for it to register. This was solved by simply leaving the swab in the mouth longer so it got wetter.”

Michael's passion and background in marketing, research, mental health awareness, and youth brings in a fresh perspective to the team. From his degree in marketing, Michael is aware how easily one may fall prey to advertising and peer pressure- enabling him to write dedicated content about specific topics pertaining to youth, and alcohol and drug usage.